The Questions You Wish You Had Asked Your Parents

I thought the below WSJ article on questions we want to ask our parents was thoughtful.  Why not, RIGHT NOW, ask any and all questions of our parents we might have?  I have lost both my parents, so I sent this to my kids and said—now is the time, ask away.

If you are good with your parents, congratulations.  Now how about your spouse?  Best friend?  Partner?  Sibling?

Here are three great questions to start with (there is more at the end of the article):

— Are you proud of me?
— How was your relationship with your parents?
— What is your best memory of childhood? Why?

I am always looking to make lemonade.  Here is a small way to do that right now.

Rule #1 from my book The Fantastic Life: Know Your Story
The people in your life play a huge role in shaping your story. Your friends and family have a great influence over your life, so why not take the time to get to know their stories, and learn how and where you connect?

The Questions You Wish You Had Asked Your Parents
Adult children often wait until it’s too late to truly understand their parents. Now, that’s starting to change; ‘I wish I knew.’

For years, Sarah Smith wanted to know more about her mom’s relationship with her own mother. “I’d like to know why my mother felt unloved,” says Ms. Smith, a stay-at-home mom in Dallas. “And what was said that made her feel insecure and less confident.”

Ms. Smith, 45, didn’t press. Now, she’s unlikely to ever know. Her 74-year-old mother has early-onset Alzheimer’s and lives in a memory care unit.

As significant as parents are in life, their adult children often don’t know what shaped them and what they were like before they became mom and dad. They may be curious about their parents’ background and choices, but don’t think to ask questions or know how to begin. They are busy with raising their families and jobs or live hundreds of miles away. Other topics—children, school, work—can seem more pressing.

Parents themselves aren’t always forthcoming, telling only the happy stories and filtering out painful ones. Some don’t think their lives are all that interesting.

Yet today, for some people, that is starting to change. There’s a growing interest in understanding our parents’ lives. Part of it is generational: Younger people are more transparent and used to telling the story of their own lives, often online for many to see, and expect it from others.

“I think younger people find it difficult to understand parents and grandparents who haven’t documented in the way they are doing,” says Rutger Bruining, 41, CEO of StoryTerrace, a company that helps people create their own biography books. “Kids want an answer to everything.” 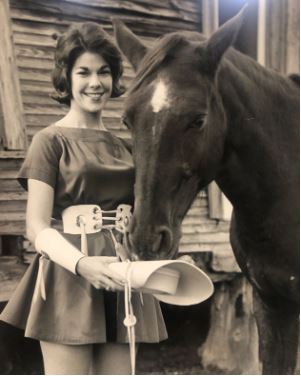 Rebecca Bearden, who loved riding horses, poses during her freshman year in college for the Rangerettes Forever Calendar. Although admired for her leadership and generosity, she lacked confidence for reasons her daughter still doesn’t understand and may never find out. PHOTO: BEARDEN AND SMITH FAMILY

A growing interest in ancestry and the rise in home DNA kits leaves people wanting to know more of their family stories, while greater awareness of dementia makes capturing them soon all the more urgent.

New technology makes it easier, too. StoryCorps, a nonprofit oral history project, has a free app that provides suggested questions, and directions on recording, saving and sharing a conversation with a family member. There are many journaling apps, too.

About a third of Americans admire what their parents have achieved but don’t know how they did it, according to a recent survey of 990 adults by StoryTerrace, which pairs ghostwriters with people who want to document their lives in a book. One in five don’t know anything about their parents before they became parents, and 45% learn more about their parents from discovering photos and family possessions than direct conversations with them, according to the survey, which was conducted in November.

Yet relationships with parents, regardless of how complicated, are the ones a person takes through life, says David Isay, who founded StoryCorps. It has recorded 600,000 interviews between family members or friends and archived them in the American Folklife Center at the Library of Congress.

Nearly everyone, he says, talks about their parents. “Someone might be 100 years old and the first thing they talk about is their parents,” he says. “It’s a reminder of the primacy of that relationship.” Mr. Isay interviewed his own dad and listened to the recording hours after his father died and found it comforting. 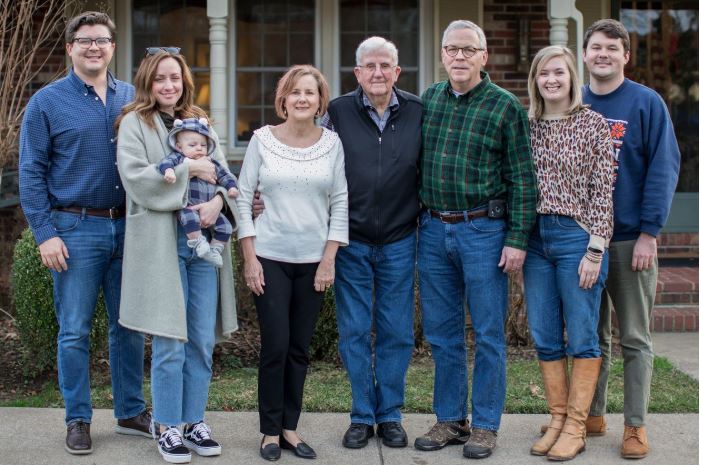 Dan Ryan was 24 when his dad died of cancer. His mom died of a heart attack two years later. “I always thought there would be more time,” says Mr. Ryan, a 60-year-old executive coach for CEOs based in Franklin, Tenn. He never got around to asking them about their childhood or courtship, his mother’s life on an Illinois farm, and his dad’s time as a Marine in Iwo Jima.

“I’m sure he saw death on a daily basis and at a young age,” says Mr. Ryan, but his dad, Robert, never talked about it. Mr. Ryan remembers visiting the cemetery with him on Memorial Day and putting flags on veterans’ graves. “I can only guess at what was going through his mind. I wish I knew.” 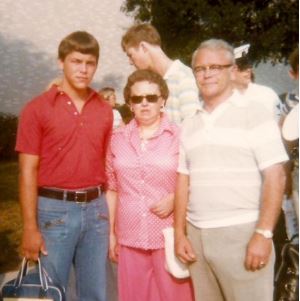 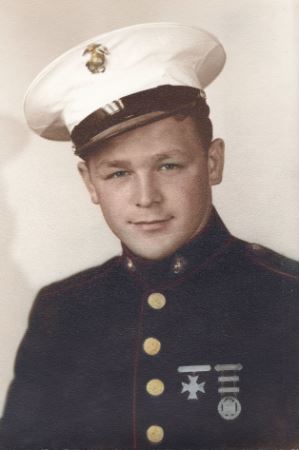 Dan Ryan’s father, Robert, who was known as Dewey, enlisted in the Marines and served in Iwo Jima.PHOTO: DAN RYAN

One undiscussed incident lingers with him. After high school, Mr. Ryan entered the U.S. Naval Academy, which he suspects made his father tremendously proud. A homesick Mr. Ryan remembers calling home and telling his dad he wanted to leave the academy. A month later, he did. His father never tried to talk him out of it. After his father died four years later, Mr. Ryan’s mother, Helen, told him that his father was disappointed in Mr. Ryan’s decision.

“I have always wondered why he didn’t say so when I called those many times to say I wanted to leave,” he says. “I suspect he didn’t want to intervene and that I was adult enough to make my own decision.”

Knowing what he missed with his own parents, a few years ago he interviewed his in-laws and taped their conversation on his phone. “None of us think about how many more days we have.” His mother-in-law died 11 months ago.

Ms. Smith, in Dallas, regrets that her mother’s Alzheimer’s has dimmed the chances to learn more about her past.

Her mother, Rebecca Bearden, was selective about the stories she told. “She only wanted to communicate things she wanted me to hear,” says Ms. Smith. That, along with the dementia, left Ms. Smith with questions that can’t be answered. Why, for example, did her mother, who was admired by others for her leadership and generosity, lack confidence? “I could compliment her all day and she would say it wasn’t true,” says Ms. Smith.

At one point, her mother said that she never felt fully loved by her own mother. When Ms. Smith asked her to explain why, her mother dropped it and so did Sarah, sensing her mother’s reluctance. “I think she was trying to protect me. She knew how much I loved my grandmother.” Her mother, she says, did grow closer to her own mother late in life.

Ms. Smith has three children and wishes she had answers for their sake. “I want to know what not to say to my children,” she says. 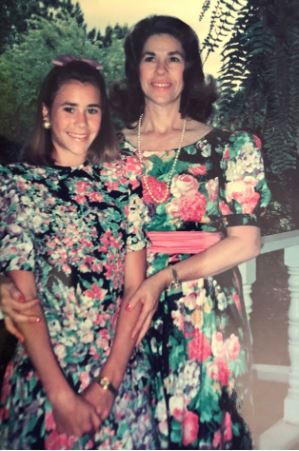 Sarah Smith and her mother, Rebecca Bearden, on Easter Sunday in 1988. Ms. Smith wrote a book about her mother’s dementia, which has dimmed her mother’s ability to answer questions about her past.PHOTO: BEARDEN AND SMITH FAMILY

Her mom’s dementia gives her a greater appreciation of the importance and urgency of transparency and storytelling. She wrote a book about caregiving, “Broken Beauty: Piecing Together Lives Shattered by Early-Onset Alzheimer’s,” and now journals daily. “It’s so easy for us to grab the phone and take notes, and journal. I do that now and it’s my hope our kids will go back and look at things I’ve written.”

Some parents feel compelled to answer unasked questions to explain themselves and why they were the parents they were. Elizabeth Jacobson, 42, knew her mother was overly protective. She remembers being dropped off at college, forgetting her coat and her mother making the four-hour round trip drive back the next day with it. “I thought, ‘I don’t know any parent who would do that,’” says Ms. Jacobson, who lives in Tacoma, Wash.

She never really thought about it or asked why. “I thought, ‘This is just mom,’” she says.

A few years later, when she was in her mid-20s and married, she visited her parents. While there, she says her mother, Pat Wilson, revealed to her for the first time that she had been married before, had a son, and that her ex-husband had taken him when he was 3 to see Santa and never returned. She hired a private detective and after years of looking, Ms. Wilson gave up her search and tried to get on with her life.

It was the early 1970s, before the internet made tracking people down easier.

Ms. Jacobson was blown away. “I sobbed the whole way home,” she says. “There was so much to take in. Everything started to make sense. Why mom was so sad all the time and why she was so protective.” Ms. Jacobson wishes her mother had told her earlier. “I think of all those years she must have stuffed down those feelings,” she says. 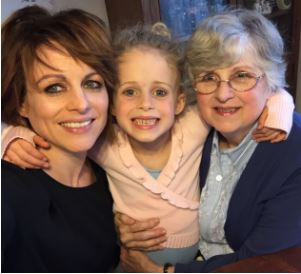 Elizabeth Jacobson, left, her daughter, Naomi, and her mother, Pat Wilson, on her mother’s 70th birthday. Ms. Jacobson didn’t learn about her mother’s first marriage or that she had a half-brother until she was in her 20s.PHOTO: ROBERT WILSON

Her mother and her son ultimately reunited in 2016, when his then-wife tracked Ms. Wilson down through ancestry.com and Facebook. After the reunion, Ms. Wilson decided to write a book called “Beauty for Ashes,” and hired a StoryTerrace ghostwriter, to help her. It would have been too hard, she says, to write on her own.

“I wanted to explain myself. It was such a huge part of my life and affected my parenting,” says Ms. Wilson, 73.

Ms. Jacobson plans on sharing the story with her own 10-year-old daughter, when her daughter is older. “I want to make sure she knows what happened,” she says. “We need to tell our stories.”

Questions to Ask Your Parents

Many people want to know more about their parents, but aren’t sure what to ask or how to start the conversation. StoryCorps suggests some prompts below.

Do you remember what was going through your head when you first saw me?

How did you choose my name?

What was I like as a baby? As a young child?

Do you remember any of the songs you used to sing to me? Can you sing them now?

What were the hardest moments you had when I was growing up?

If you could do everything again, would you raise me differently?

What advice would you give me about raising my own kids?

What are your dreams for me?

How did you meet mom/dad?

Are you proud of me?

How was your relationship with your parents?

How would you describe yourself as a child? Were you happy?

What is your best memory of childhood? Worst?

← Motivation – Tom Bilyeu
12 Phrases Every Leader Should Use →