by Craig Coppola on April 23, 2018 in Education, Self-Discipline, Self-Improvement

In this disruptive time, one essential skill I keep telling everybody about is continuous learning.  Polymath Barb Oakley has written a book debunking some myths about learning. Barb flunked out of math, but then came back and got a PhD and is now a professor.  Her personal experience coupled with insights provided by current research in neuroscience is the basis for her two books on revisiting the learning process.

You can read her story below or buy her books on this subject.  Whatever it takes to understand, we all need to continue to learn.

An overwhelming number of adults never read another book after high school. Something simple like reading an article online or watching a lecture on a new subject will help you learn far more than most adults do in their lives after school.

How a Polymath Mastered Math—and So Can You

‘Mindshift’ author Barbara Oakley on the science and practice of learning—and finding love at the South Pole. 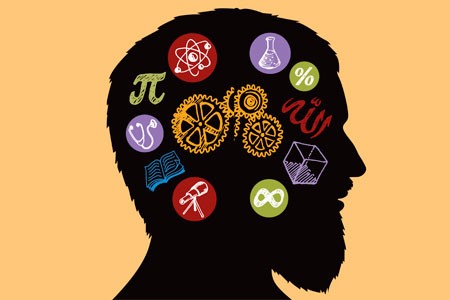 When Barb Oakley was growing up in the 1960s and early ’70s, nobody took her for a future engineer. “I just rode horses all the time,” she says when I ask what interested her as a girl. She was especially indifferent to math. At age 7, she lagged her classmates in learning the multiplication tables. “Because math is so sequential, if you fall off anywhere along the way, it’s hard to get back on. I just came to the conclusion at that time that I really couldn’t do math,” she says. “I flunked my way through elementary, middle and high school math and science.”

Eventually she figured out she had underestimated herself. Today she is on the engineering faculty at suburban Detroit’s Oakland University, where she earned a master’s and doctorate in the 1990s. She was such a standout student that her professors recruited her: “Oakland was like, ‘Hey, someone is retiring here right now. You need to hurry through your Ph.D. fast, because this position’s coming open.’ ”

Her progression from desultory student to respected scholar led her to a sideline in the study of learning itself. She’s published two books on the subject, “A Mind for Numbers: How to Excel at Math and Science (Even if You Flunked Algebra)” (2014) and the new “Mindshift: Break Through Obstacles to Learning and Discover Your Hidden Potential.” Neuroscientist Terrence Sejnowski has helped her understand how the brain works; together they developed a massive open online course, “Learning How to Learn,” which by some measures is the world’s most popular MOOC. In addition to her Oakland affiliation, she is a distinguished scholar of global digital learning at Ontario’s McMaster University.

An Air Force brat, Ms. Oakley (then Barbara Ann Grim ) enlisted in the U.S. Army right out of high school. “I always wanted to learn a language, since I couldn’t do math and science,” she recalls. She studied Russian, first at the Defense Language Institute, then on military scholarship at the University of Washington. There she earned a bachelor’s degree in Slavic languages and literature and, thanks to ROTC, an officer’s commission.

“I was all set to go into military intelligence, and they instead commissioned me as a signal corps officer,” she says. Her work entailed supervising the installation of telephone systems. She knew how to do the job—“this needs to hook to that”—but had no idea “what was going on behind this hooking to that.” Her colleagues did. “I didn’t understand what a frequency was and what electromagnetic waves were,” she says. “I was working with all these West Point engineers, so I was really not very good at my job.”

When she left the Army at age 26, “I realized that I’d sort of boxed myself in a corner careerwise.” Her only expertise was Russian fluency—not terribly marketable even during the Cold War. But she remembered her engineer colleagues from the Army. “They had great careers open for them, and I didn’t,” she says. “Here I was, always boxing myself off and saying I couldn’t do math and science. So I decided to try it.”

Again she enrolled at the University of Washington, where she started with “remedial high-school algebra, and slowly began working my way up.” It was a struggle at first: “Sometimes I’d look at the pages and think: Did they deliberately write this to make it so that nobody could ever understand it?” She tells me some of her old textbooks have “dimples” where she stabbed the pages with a fork.

She skipped some terms to work during fishing season as a translator on Soviet trawlers in the Bering Sea: “I have some very good drunk-Russian stories.” She took off the 1983-84 academic year to work as a radio operator on the other end of the Earth, at the Amundson-Scott South Pole Station. But she gradually improved her skills and earned a bachelor’s in electrical engineering at 31 after five on-and-off years of school.

By trial and error, Ms. Oakley had learned how to learn: “The higher I went, it started to gradually make more and more sense.” Her language experience proved valuable. “The way you learn intensively for a language is very similar to learning well in math and science,” she says. But that isn’t the predominant view among American educators. “In learning math and science through K-12, it’s long been held that practice and repetition will kill your creativity,” she says. “One mistake we make in the school system is we emphasize understanding. But if you don’t build those neural circuits with practice, it’ll all slip away. You can understand out the wazoo, but it’ll just disappear if you’re not practicing with it.”

Yet while focus and practice are important, so is relaxation: “There’s two different networks in your brain. One is [active] when you’re focusing, and the other is a much broader network.” She describes the latter network, which operates during “neural resting states,” with a simile: “It’s like a librarian: ‘Hmmm, I’ll put this book here, and I’ll put this marking on it so I can look it up later.’ ”

Thus sometimes the way to solve a problem is to stop paying attention to it. “It’s perfectly normal to look at something, . . . not understand it, and have to go away from it and let that other mode sort of cogitate in the background making connections, so that when you come back and look at it a second time, it will make sense.”

Ms. Oakley notes that “many, if not most,” of her engineering colleagues “are from countries that have educational systems completely antithetical to the education system in the United States.” In places like China and India, “practice and repetition and rote and memorization are really important parts of education.” She sees value in both methods: “There are real benefits for Western approaches—that it really does help with creativity. And there are also real benefits to Asian approaches—that it builds a solid foundation in the most difficult disciplines, math and science. The best education would actually be a combination of both approaches.”

Learning beyond the classroom is the subject of her new book. She defines a “mindshift” as “a change in your outlook that occurs through intensive learning”—such as her own mastery of math and engineering. The book is filled with advice for people who are considering a career change or who seek to develop “an attitude of lifelong learning,” even in retirement.

“I got to travel all around the world and meet people who had made these kind of interesting, really sort of mind-boggling changes,” she tells me. One of them is Ali Naqvi, a Pakistani professional golfer turned marketing executive with Ogilvy & Mather in London. “He’s found that his past, which seems to be completely disconnected, is actually very relevant to what he’s doing.” Some of the ways are obvious—Ogilvy “does a lot of sports marketing, and he understands that world”—and others less so. “When you make a mistake in golf, you have to let it go, and move ahead, and do not think about these past mistakes,” she says. “He trained himself in that, and he’s found that it’s very helpful in the business world.”

Mr. Naqvi was like the younger Ms. Oakley, in that “he couldn’t do math either, then, through MOOCs and so forth, he learned.” That enabled him to master search-engine optimization, “the most mathematical of all the marketing stuff.”
Another of her case studies is Mr. Sejnowski, her MOOC co-instructor. In the late 1970s he was a theoretical physicist studying relativity at Princeton, the “bastion” of the field. His future seemed bright, but he worried that the capital costs of physics research—building supercolliders and the like—were so great that, in Ms. Oakley’s words, “there’s not going to be a way to really make progress in his lifetime.” He switched to neuroscience. “Everybody was like, ‘You’re nuts. Why on earth would you give up something like that?’ ” she says.

In her book, Ms. Oakley draws on Mr. Sejnowski’s expertise: “That allows me to talk about what’s going on from a neuroscientific perspective about, for example, how 1,400 new neurons are born every day in the hippocampus, and here’s what you can do to help nurture them. Learning actually serves as a sort of trellis to allow those new neurons to survive and thrive and grow.”

She also interviewed ordinary people who’d made a “mindshift.” Claudia Meadows was a bus driver who suffered from depression. She “hit bottom and decided to use learning to try to get herself really out of it—not just drugs and so forth, but to really try to reprogram her brain. And by golly, she did it.”

How do you strengthen your mind as you age? Some of the answers are what you’d expect. Physical exercise helps encourage neuron growth. Some forms of meditation improve creativity, while others sharpen focus. In one study, “reading a book for around 3½ hours a week was shown to extend the lifespan . . . by something like two to three years.” Learning a foreign language “gives a workout to the very centers of the brain that are most affected by the aging process, so it’s super healthy.”

Others are surprising. “Action videogames are incredibly helpful in keeping you sharp,” Ms. Oakley says. “They’ve been shown by research—top-notch research—to make a big difference in your attentional centers.” Videogames even improve eyesight. “You can drive better; you’ll catch if some little animal is darting in from the side,” she says. “Fine print on a medicine bottle—you can see it better if you’re working with these action videogames.”
Ms. Oakley’s own sense of play is evident when she talks about her husband of 33 years, Phil Oakley, who worked as the South Pole Station’s garage manager. On New Year’s Eve 1983, three weeks after they met, he proposed “at the true South Pole, at the stroke of midnight. . . . Three weeks after that, we got married, as soon as we got off the ice in New Zealand.”
She remembers their time at the pole fondly. “It was kind of fun. You could actually run around the world in a few seconds,” she says. “We would go out on dates to the garbage dump, because there’s like nothing to do there. I like to joke that we started global warming.”